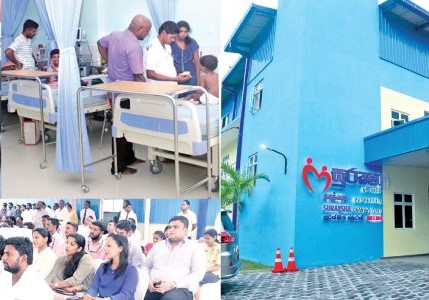 Melwire Group of Companies came forward to build and open a brand new building (SURAKSHA Children’s Centre) at the Negombo District General Hospital.   The Company allocated over Rs. 200 Million for this CSR project that was opened on 13th June 2019.

The ground and first floors of this building have got two wards with over 50 beds each. Every ward is being equipped with beds, fans and stainless steel cupboards for every little patient.  This building contains a play area for the children and special facilities for the doctors and nurses.  The large lobby contains a vibrant colour fish-tank and all entry area walls have large cartoon paintings of animals and nature.   The second floor has a child development clinic, where therapies and other interventions are provided.

Negombo public as well as Negombo District General Hospital Consultants said that this was a long felt need for the area and thanked the Melwa Group for their magnanimous contribution. Melwa Group has also taken over to carry out long term maintenance of the Centre.

Melwa being 100% Sri Lankan family owned company, is in to the steel industry and has invested on pharmaceutical, hospitality and leisure industries too.  The total project was initiated under the Melwa CSR arm “Melwa Foundation”.   The Melwa Foundation has been involved invarious CSR projects since its inception, in year 2002.